skip to main | skip to sidebar

Earlier this week we received the news that Daniel Schreiber - chocolate-maker-in-chief, proprietor of local artisanal chocolate outfit Flatlander Chocolate, and Market vendor - passed away suddenly Tuesday morning at the age of 24.

Daniel's amazing energy and his passion for local food - well, all things local, really, but especially food - have been an inspiration to many, including me.
About a year ago, a mutual friend introduced us during an Art at the Market event. Dan had just tried his hand at making his own chocolate from the cacao bean and was passing it out to people at the Market. The chocolate was wrapped in foil and construction paper, and after trying mine I thought, this guy is onto something.
"If you ever decide to do this for real, you should totally sell it at the Market," I told him.
"Do you think people would go for it?" he asked.
"Oh, HECK YES," I said.
Daniel was always a huge supporter of the Market and its farmers, even before he began selling at the Market during the 2010 season; he was at the Market almost every weekend, picking up produce and other groceries. Once he started selling, he learned very quickly how to improve his display to engage potential customers and was very good at talking with them about what he did and how he did it. Last weekend, he had a LINE - not only was he educating shoppers about how he made chocolate, he was selling a new product, a chocolate-hazelnut spread/sauce called "Artella" or "UrbanaTella". He was working with other farmers on "inclusions" for his chocolate - currants from Prairie Fruits Farm, for example. I'm sure there were others in the works. He was in the process of really arriving. He was full of ideas and vigor and his enthusiasm was contagious.
Daniel's space at the Market, in Row 4, toward the north end between Great Harvest Bread Co. and Prairie Fruits Farm, will remain empty for the remainder of the season, except for the occasional musician (he loved the music at the Market). This Saturday, we encourage Flatlander fans and friends to leave flowers, notes, and other remembrances at the space. 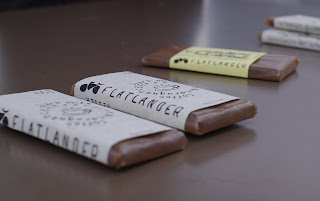 No Farms, No Food

Elsewhere on the internet

Urbana's Market at the Square

7 AM 'til noon every Saturday through November - RAIN OR SHINE